Many flags flew over the 2016 Trump for President campaign, all in full view, waving and snapping in the brisk political winds. (I could not find a flag to represent misogyny, but that belongs there, too.) Instead we preferred the the man in Grant Wood’s painting: a stolid, dependable family man, infused with American heartland values, ingenuity, and valor.  So that is the man that Donald Trump sold us.

That man was fading to extinction even in Wood’s time, which is probably why he memorialized him in paint.

Trump told us he was a man who had made the American dream work for himself, and now he wanted to make it work for us as well. Out of the goodness of his heart.

He told us he wasn’t one of them—the soulless plutocrats of high finance, or the robber barons of industry. He was so rich that he was not beholden to any of them to bankroll his campaign. He had the big jet plane to prove it, and great golden towers in cities around the world. (We had to take his word for this. His financial records were strictly out-of-bounds. That’s okay, though; when has he ever told us anything that wasn’t true?) He promised to rid us of these economic parasites when he became president, just as the Pied Piper promised to rid Hamelin Town of rats.  (Do you know where your children are?)

“Drain the swamp!” he said. 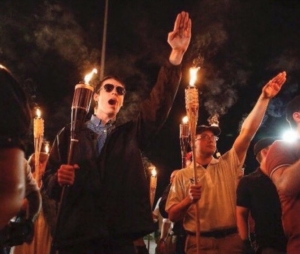 He was going to rid the country of undesirables–Muslims, Mexicans, transgenders, etc–and build a border wall to keep them out for good; they were all drug lords, rapists, and queers, after all. The alt-right—white supremacists, neo-nazis, assorted kooks and trolls—would help him do it, rallying  behind political savant Steve Bannon, like  Liberty leading the People, but mercifully without the bared bosom. Trump promised to shut the door to immigration in order to save American jobs, even while the jobs themselves were emigrating.

“Build that wall!” he said.

Corruption and ineptitude would be things of the past. He was going to make his predecessors pay for their political crimes, starting with Hillary Clinton, for something heinous that she did with with her emails–I can’t remember exactly what.

Instead of all that, we got a mountebank with the demeanor of a child and the conscience of a rattlesnake, along with a posse of his ilk. “I could go out on Fifth Avenue and shoot somebody,” he boasted before the voting, “and still get elected.” I don’t know if he actually did that, but he did get elected.

Did he know then that his campaign was getting a boost from foreign forces? Perhaps. In any case, we elected him, and handed him the keys to our treasury and nuclear arsenal.

We can’t say he didn’t warn us. Nothing he has done from the Oval Office has been truly a surprise. Impeachment is a fearsome remedy, though, like amputation. Amendment 25—removal for incapacity—carries even more frightening implications when it is exercised in the name of the President’s mental health or character.

Most of these people have been fired.  Only Pence, Putin and Kushner remain.

Midterm elections are not far off now. Governorships, many state legislature seats, a third of the Senate, and every seat in the House of Representatives will be up for election. If you are anxious about the way things are going, stand up.  DO NOT SIT THIS ONE OUT!