Which is America’s Worst Mass Shooting?

When I was very young, I wanted to be a writer.  Not to write—I never thought about that part—but to be a writer.  I would wear ice cream colored suits with a breeze of rebellion and a gale of edgy fashion, like Mark Twain or Oscar Wilde.  I would be invited to elite venues where I would say outrageous things, which would be widely admired in the morning papers, attesting to my rare wisdom and wit.  I would be a writer, and I would be the best.  That was the important part: being the best.

It seems to me that the world has now become obsessed in a similar way with putting drama before substance, and projecting just the right amount of edginess, whether it is really there or not.  This makes commercial sense.  Drama attracts broad attention to enhance market share, while substance risks offending.  Substance also demands accuracy and reliability, which adds to cost.

Being something has become more important than actually doing anything, and everything that happens now must be somehow the biggest or best that ever was.  What this does is to draw us into current events as individuals, making us passive participants in that related pseudo-phenomenon, the “historic event”, even when these events are not even vaguely about us.

We extend this illusion by inventing scales and comparators so we can use superlative adjectives, and we get away with it because people are only half-listening anyway:

“The Red Sox extended their winning streak to three games today, the most wins in a row since this time last week, and the longest winning streak this year that started on a Tuesday!.”

“Parts of the area had more rain this morning than they have seen all month.  Some spots saw up to three quarters of an inch, well over the totals they experienced on this day last year!  As a result of the precipitation, the record-high Pollen Index fell for the smallest amount since the Index was developed a year ago!”

“A hot air balloon crashed into power lines in the town of Gosnold, MA today, killing both occupants of the basket.  This was the deadliest accident involving a lighter-than-air vehicle in the over 400-year history of the Elizabeth Islands!”

Having saturated the sports and weather sections of the local newscasts, the rampage of superlative adjectives has gone viral.  It is found in every corner of journalism, and is echoed by social media in all its nooks and crannies. It has become the fastest-spreading meme wherever hyperhype and trite language abound.

I usually find this mildly amusing, or at worst a little annoying, but sometimes it arises in a context where it is so inappropriate I am actually offended.  This happens most often when superlatives are attached to mass tragedies:  The worst air disaster, the largest hurricane, the most massive earthquake.  Casting these events in superlative terms invades the privacy of those actually involved at a very vulnerable time: no one wants to be a champion of grief.  It also trivializes the experiences of those who are moved down on the leaderboard of pain, but provides them no relief.  In the case of terrorist groups and of

mass shooters acting alone, it also immortalizes their work, which is exactly the reward they sought.

Consider this: lately we have heard repeatedly, in newscasts and in print, that the massacre at The Pulse in Orlando, in which 49 people died outright and many others were critically injured, was the “worst” or the “largest” mass shooting in American history.  This is a difficult thesis to defend.

The worst mass shooting in US history unfolded between July 1st and 3rd in 1863 outside Gettysburg, PA.  It is impossible to know how many were killed then, for some men deserted the field and were never seen again.  Nearly 50,000 men either died or disappeared over those three days.  True, that was a military battle and thus may not count. Despite that technicality, those men are just as dead, and their families just as damaged, as they would have been if it did not bear that label.

In 1876, on the Little Big Horn River in Montana, an alliance of Lakota Sioux, Northern Cheyenne, and Arapaho numbering over 2000 warriors were attacked by an American expeditionary force of 664 soldiers.  The Native Americans were armed with modern Winchester repeating rifles, while the soldiers were armed with single-shot Springfield carbines and Colt revolvers.  Outmanned, outgunned, and outmaneuvered by the aboriginal warriors, the Americans were massacred.  268 soldiers died on the spot, and 49 wounded; 6 would later die of their wounds. The Native Americans lost around 30 warriors, 6 women, and 4 children.  This was a quasi-military action, too, and the victors were acting in self-defense.  Perhaps it shouldn’t count, either, but don’t say that to the comrades, widows, and children of the slain.

In 1890, Col. James Forsyth went into the Lakota camp of Spotted Elk near Wounded Knee Creek in Montana, with a detachment of 438 cavalrymen, to disarm the Sioux “voluntarily”.  A deaf tribesman called Black Coyote was reluctant to relinquish his weapon, because he paid a lot of money for it and no compensation was offered, an argument most Americans can understand today.  A scuffle over the weapon resulted in its discharging harmlessly into the air, probably by accident.  On this cue, the 7th Cavalry then began firing indiscriminately at the tribe.  The warriors who had not yet surrendered their weapons fired back, and were quickly annihilated by overwhelming Army fire.  Many who had just been disarmed fled, pursued by cavalrymen who killed many of them.  When the smoke had cleared, 84 native men, 44 women, and 18 children were dead.  Four men and 47 women and children suffered wounds; 7 later died.  This cannot be dismissed as a military action; there was no coherent command directing it and no strategic objective.  It was simply a riot. Since most of the dead were native tribespeople, though, the shameful historic blindness of European-Americans comes into play—maybe “Indians” don’t count either.  Their anguish—individually and as families, tribes, and a people—is certainly no less real despite that. 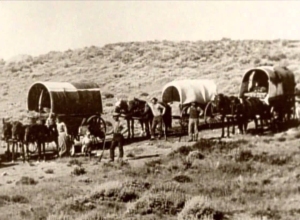 In 1857, a wagon train left Arkansas for a better life in California.  It was comprised of prosperous families, their wagons laden with their accumulated wealth and followed by their cattle and other livestock.  Along the way, other parties joined the expedition, until they numbered about 140 people.  They stopped to rest at Mountain Meadows, Utah.  There, on September 7, a band of brigands comprised of members of the Nauvoo Legion, a local militia sanctioned by the Mormon Utah territorial administration, attacked the wagon train.  Intending to steal the property and livestock of the travelers and blame it on the Native Americans, they were dressed as Paiute tribesmen and had recruited some actual Paiutes to complete the effect.  The travelers circled the wagons, built earthworks, and for a week mounted an effective defense, believing they were repelling a Paiute attack. Most of the actual Native Americans had left by this time, wary of the motives of the Nauvoo Legion.

On September 11th two militiamen came into the wagon camp under a white flag, followed by Indian Agent John Lee.  Lee told the travelers that he had negotiated a truce with the Paiutes, and he promised them safe passage to Cedar City, 36 miles away, with a military escort.  It was a lie, of course; there were no Paiutes.  Still, in their exhaustion and desperation, the travelers agreed to the price, which was to turn all their livestock, arms and supplies over to the “Indians”.

They left their improvised fortification.  The women and children went ahead in wagons.  One wagon held the 17 children who were under seven years old.  The men followed on foot in single file, unarmed, each abreast of a Nauvoo Legionnaire.  When the wagons had advanced beyond line of sight of the men, Militia Major John Higbee shouted: “Halt! Men, do your duty!”  Each militiaman then turned to shoot and kill the civilian beside him.  The sound of this attack was the signal for other Nauvoos, who had been hiding in trailside bushes and swales, to emerge and slaughter the women and children also, so as to leave no witnesses to these events.  The Legion spared the cartload of children under seven, since they were too young to bear witness.  They abducted these children and turned them over to other Utah families to raise as their own.  The livestock and booty was divided up, much of it sold at auction.

In the end, more than 140 individual murders happened at Mountain Meadows, along with 17 kidnappings and an enormous robbery.  Though the gang of thugs who perpetrated these atrocities called themselves a Legion, and the Mormon-dominated Utah Territory sanctioned them as a militia, this was not in any sense a military or religious action.  It was conspiracy of criminals in a lawless land to commit mass murder, for the purpose of stealing other peoples’ wealth.  More people died in this civilian mass shooting than in any that have occurred in the centuries that followed.  The grief and anger that grew from this monstrous crime were no less intense, nor better justified, than any that have occurred in the 21st century.

So as a society, let’s do this:  let’s not use superlative adjectives to describe terrible tragedies, but instead recognize that survivor’s grief is a desperate, personal singularity within each one, yet each one individually has no limits, no matter how many other people are affected.  Let’s mourn for each of the lives lost in The Pulse, but not forget our losses at Columbine, Newtown, San Bernardino, and so many other scenes of horror.  Let’s not underestimate our own capacity for evil, nor engage in the conceit that our own experience of civil mass violence is somehow bigger or better than that of our forebears.  When something truly horrific happens to someone else, let’s start really listening to their stories, no matter how much pain, grief, anger or guilt we feel when we do.  Let’s not allow accounts of harrowing events of such importance wash numbly over us in a wave of banal platitudes. Let’s put aside the passive drama, and do the active work that leads to empathy and understanding.  It is hard, excruciating work, but it is the only real path to peace.  Let us dedicate ourselves to making the enduring changes, within ourselves and our society, which will ensure that such horrors will not continue to occur.  Let’s all become better human beings.